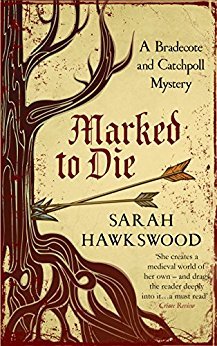 October 1143. His task dispatched, a mysterious archer melts back into the forest leaving a pile of corpses in his wake. The lord Sheriff of Worcester cannot ignore such a brazen attack in the salt road from Wich, nor the death of a nobleman in the wrong place at the wrong time. And so Hugh Bradecote and Serjeant Catchpoll are dispatched to hunt an elusive killer and his gang and put a stop to the mounting attacks.

But it is not easy to get a culprit in their sights with a reeve keen to keep his position at all costs, a lord with his own ends to serve and a distrusting and vengeful widow to whom Bradecote is increasingly attracted.

And thus another mystery for Bradecote & Catchpoll begins! As a keen reader of historical crime fiction, I am delighted to welcome Sarah Hawskwood, author of the Bradecote & Catchpoll series to The Shelf today to talk about some of the inspiration and research behind her latest book, Marked to Die, now available in paperback.

Sarah, welcome to The Shelf of Unread Books! Marked To Die is the third in your Bradecote & Catchpoll series. For new readers, can you tell us a little about the series in terms of the setting and the characters?

The Bradecote and Catchpoll series is set in Worcestershire in the 1140s, during the period of civil war known as the Anarchy, when the daughter of Henry I, the Empress Maud (Matilda) was trying to oust King Stephen, Henry I’s nephew. It was a period of political turmoil, with much changing of sides by the higher elements of the social hierarchy, but for the average man it just added the threat of greedy and rampaging lords to those of day to day living. Most of the crimes that are investigated are not influenced by politics, but then again, some are.

In terms of the characters, Serjeant Catchpoll is English to the core, phlegmatic and practical, a ’seen it all before’ man of experience. The undersheriff, Hugh Bradecote, is a minor manorial lord, with as much English ancestry as Norman, a man who speaks Norman French as a mark of his class, but is perfectly at home in the language of his manor folk, and one who has never gone further than Winchester, let alone across the Channel. He thinks of himself perhaps as a ’Norman Englishman’. He and Catchpoll are very different, and yet grow over the series to appreciate and respect each other, and by this, the third book, early antagonism is past, and they are very much a team, now augmented by Catchpoll’s ’serjeanting apprentice’, young Walkelin. Walkelin is bright, eager, and methodical in thinking, but still on a steep learning curve.

You’ve previously written a non-fiction book about the First World War and you studied Modern History at Oxford. What is it that led you back to the twelfth century for your fiction?

Whilst my military history focus was on the Peninsular War and then World War I, I always retained an interest in the Anglo-Norman period between the Conquest and the first Plantagenet, Henry II (the ‘Modern History’ period at Oxford began when the Romans left Britain).

I think in part this was because when I was at university the big division was between those who argued that there was continuity after 1066, and those that saw the Conquest as massive change. I think both are true, but at different levels. Politically the change was enormous, an almost total replacement of the most powerful men in the country, and with new architectural styles, and a new language of court and power imposed. Yet at the same time, the life of the peasant or small town artisan in 1130 was not that much different to that of his great- grandfather. Old English was still the language spoken by the majority, and it was only just beginning to be modified, but not overthrown, by a Norman French influence. After all, our grammar today is very much Old English based, not French, and most of the words we use for basic things that existed then as now are the same.

The most interesting level of society is that of the Hugh Bradecotes in England, men whose paternal line went back to to men who came over with the Conquest and its aftermath, but who married the daughters or widows of English thanes, men with no land in Normandy and whose focus and loyalty was to the soil of England. It makes for a fascinating blend.

Bradecote & Catchpoll have to investigate within a strict hierarchical society quite different to that which we know today. How does the societal structure of the era impact on the mysteries you create?

The societal structure is very important in the way that various characters interact, and yet there is another hierarchy, that of experience. This means that whilst Catchpoll always calls Bradecote ‘my lord’, he has not been beyond treating him as the junior partner, although now it is very much more equal. Respect has been learned on both sides, and I think it is that which I feel is most important. Coming from three generations of Royal Marines senior NCOs, I am well aware of both a hierarchical structure, but also that rank is not everything. The wise subaltern knows that whilst his sergeant major calls him ’sir’, he will do well to listen to the suggestions of the far more experienced man before making his decisions.

I also have to work within a framework where women are not treated as equals, and not baulk at it. The women in the books are often strong, but bound by the limitations of the period. To overstep those would be to dress up the contemporary world in old garb and with a different diet.

Overall I have to write a world where the Church is very influential, belief is taken as read, the powerful dominate those without power ( so not much is different there) and social boundaries are pretty rigid, unless one transcends them via the Church, as in the case of Thomas Becket.

Your novels are set in and around Worcestershire. How much does the setting impact on your writing? And why did you choose to set your books in there?

I set the series in Worcestershire because it was a shire where no one side in the Anarchy held total sway, and it was also interesting topographically, from the swathe of the Severn Plain to the Lickey Hills and the Malverns.

It so happens that for other reasons we now live in Worcestershire, and it means I can ‘recce’ for my novels, working out routes according to old trackways, high ground and bogs, finding churches that, even if few vestiges remain standing of their 12thC presence, are still in the same locations, with the same views. It makes everything even more real to me, and is hugely helpful, since I write very visually. I see every situation as if watching it on a television screen, but am able to wind back and change the actors’ marks and dialogue.

There must be quite a lot of research involved in writing medieval mysteries. How do you research your books? And do you have any recommendations for any readers keen to learn more about the era?

My grounding in the period stands me in good stead for the basics and the political situation, but of course there were huge gaps in practical knowledge, where such things as archaeology have brought new information to light over the last thirty years. I do try and find out as much as possible about how particular trades were conducted at the time, when crops were harvested, how foods were prepared. I want the ‘world’ I create to be as accurate as possible, within reason.

One of the most useful writers on the period was the wonderful Marjorie Chibnall, and I consult her books frequently to check details, but I would recommend also Stephen And Matilda by Jim Bradbury as a starting point.

So is there more Bradecote & Catchpoll on the horizon for fans? Are you ever tempted to explore another era with a new series?

Well, I very much like the idea that there are ‘fans’, and as for more books on the horizon, certainly there are, since the next five in the series are written, and I am in the early stages of Wolf at the Door, number nine.

However, as with all publishing, everything is dependent upon the sales of the current book to enable the next to see print. I foresee the series could eventually reach perhaps twelve to fourteen novels, but I know I have a cut off point in history, and also feel that it must never overstay its welcome.

After Bradecote and Catchpoll? Writing more murder mysteries would be hard, simply because I would hate to drift into writing a more modern version of my ‘old companions’, though something involving the Peninsular War army would be tremendous fun. However, I think if anything I might head backwards, and into rather more ’ straight historicals’. We are talking seventh to ninth century, and I have a general concept of a trilogy. I just have to hope nobody else settles on the same sort of thing first.

Marked to Die is out now, as are the first two books in the Bradecote & Catchpoll series, Servant of Death and Ordeal by Fire. Fans of historical mysteries, especially Ellis Peter’s Cadfael series, Ariana Franklin’s Mistress of Death series and Bernard Knight’s Crowner John, will find much to enjoy here – as indeed will anyone with a fondness for a good mystery in a well-realised historical setting!

A big thank you to Sarah for taking the time to answer my questions – it has been a pleasure to have you visit The Shelf.

Marked to Die is published by Allison and Busby and is available now in paperback and ebook from all good booksellers including Hive, Waterstones and Amazon. My thanks go to the publisher for providing an advance copy of the book in return for a honest and unbiased feature. 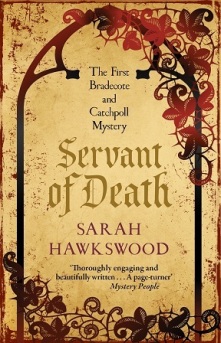 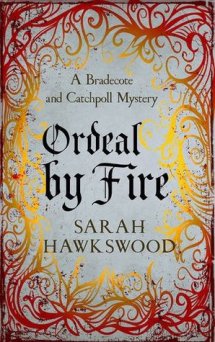 Just the thoughts and ramblings of another book addict. 📖

In Which I Indulge My Bookish Nature