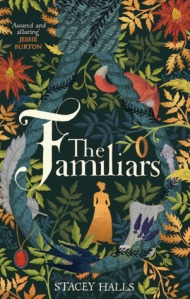 In a time of suspicion and accusation, to be a woman is the greatest risk of all…

Lancashire 1612. Fleetwood Shuttleworth is 17 years old, married and pregnant for the fourth time. But as mistress at Gawthorpe Hall, she still has no living child, and her husband Richard is anxious for an heir. Then she crosses path by chance with Alice Gray, a young midwife, who promises to help her give birth to a healthy baby.

When Alice is drawn into the witchcraft accusations that are sweeping the north-west, Fleetwood risks everything by trying to help her. As the legendary Pendle witch trials approach and Fleetwood’s stomach continues to grow, time is running out and both their lives are at stake…

Strong female characters? Check. Spell-binding setting? Check? A new perspective on an infamous historical event? Check. It’s safe to say that Stacey Halls’ debut novel, The Familiars, has, for me, all the characteristics of a captivating and engaging read. And, sure enough, it didn’t disappoint.

Set in Lancashire on the eve of the infamous Pendle witch trials of 1612, The Familiars is the story of two women. Fleetwood Shuttleworth is the new mistress of Gawthorpe Hall and pregant with a potential heir to the estate. Her husband, Richard, is an up and coming young nobleman, widely respected in the area and increasingly coming to the notice of the King and his court. But beneath this life of privilege, Fleetwood is becoming increasingly desperate. Having suffered the loss of three children in miscarriage and increasingly worried that Richard is keeping secrets from her, Fleetwood fears for the safety of both herself and her unborn child.

Alice Gray is also desperate. Poor and alone, the chance to work as a midwife for Fleetwood offers Alice an opportunity to use her knowledge of the natural world to escape the mistakes of her past. But a chance act of kindness sees Alice become embroiled with the infamous Device family. With accusations of witchcraft spreading like wildfire – and a Justice of the Peace determined to fan the flames to aid his own advancement – it isn’t long before both Alice and Fleetwood are caught up in the storm that follows.

A beguiling combination of naivity and tenacity, Fleetwood’s determination to prove Alice’s innocence – and secure a future for both herself and her unborn baby – makes for a captivating narrative. One of the joys of the novel is seeing Fleetwood come into her own. From overwhelmed new mistress, struggling to manage her home and her husband, to determined young woman, courageously fighting for both her life and her friend, Fleetwood is the beating heart of the novel and I was utterly absorbed into her world.

1612 Lancashire is vividly re-created. From Fleetwood’s life of hunting and hosting to Alice’s impoverished home, the world inhabited by these women comes vividly to life – along with all of its inequalities and superstitions.

Whilst there are plenty of novels that expose the truth behind the lives of the women accused of witchcraft, The Familiars provides an intricate and sensitive portrayal of women from opposite sides of the social spectrum, highlighting how fear of female knowledge, combined with desperate poverty and machivallean attempts to retain power, lead to a spread of false accusations that soon developed into a wildfire.

Whilst I found some of the story beats that follow to be somewhat predictable, Stacey Halls’ vivid portrayal of Fleetwood, Alice, and the world that they inhabit pulled me through the novel in a matter of days. I particularly enjoyed the complexity that Halls’ brings to her characters, illustrating their flaws and allowing for the hypocracies and prejudices of the era but without allowing them to fall into caricature.

Overall The Familiars is an assured and well-realised debut with a captivating first-person narrative at its heart. Dramatic and atmospheric, it’s a spell-binding and compulsive read which is sure to appeal to fans of Sarah Moss’ The Essex Serpent and Diane Settenfield’s Once Upon A River.

The Familiars by Stacey Halls is published by Zaffre and is available now from all good booksellers and online retailers including Hive, Waterstones, Book Depository, and Amazon.

3 thoughts on “REVIEW!! The Familiars by Stacey Halls”