IT WAS THE PERFECT FLAT

After a seemingly endless search, Jessie thinks she’s finally found a decent place to live in the four-bedroom flat at Maver Place.

And when she’s befriended by fellow tenants Lauren and Sofie, Jessie thinks she’s got great flatmates to share it with.

BUT WHAT SECRETS ARE THEY KEEPING?

Then disturbing things start happening – weird noises in the middle of the night and things going missing. But when Jessie learns a previous flatmate has disappeared, she starts to doubt if she can really trust these strangers after all . . .

When you flatshare, how well do you really know the people you’re living with?

Moving in with strangers is always a stressful and nerve-wracking affair. Wondering about whether you’ll fit into the established group. Whether new housemates will be clean, tidy, noisy, or just downright weird. Whether the landlord bothers with maintenance or is content to leave the place with no hot water for weeks on end.

Add in the fact that this move is a chance to move on from a controlling and abusive relationship and it’s no wonder that Jessie Campbell, the protagonist of Jennifer Savin’s debut novel The Wrong Move, has been careful in her search for the perfect flat.

When she enters 4 Maven Place, it appears as if Jessie might finally get the fresh start she’s looking for – the place is mould-free, the bedroom is bigger than a shoe-box and, most importantly, the housemates seem nice. Sure, the guy on the ground floor – Marcus – is a bit of a loner, but the two girls – Lauren and Sofie – seem welcoming and Lauren, in particular, is keen to make friends.

But, as Jessie starts to settle into Maven Place, disturbing events keep interrupting her new life. Why are there always strange dragging sounds coming from Marcus’ room in the middle of the night? Why do things keep disappearing from her room even when it’s locked? And what exactly happened to the previous women who lived in Jessie’s room?

The Wrong Move is a psychological thriller that hits the ground running from the very first page. Jennifer Savin has cleverly used new-housemate nerves to pile on the tension, sowing seeds of doubt in the reader’s mind about not only what lies behind Marcus, Sofie and Lauren’s seemingly pleasant exteriors but also Jessie’s own reliability as a narrator. So many of the disturbing events that begin to occur – a moving laptop, a lost bracelet, a broken door lock – are so incidental and rationally explained that I began to wonder whether Jessie’s unease about Maven Place was simply the result of her understandably paranoid mind. By the end of the book, it’s apparent that something considerably more sinister is taking place. I won’t spoil the plot but there’s certainly some shocking twists and revelations in there, making The Wrong Move quite the page-turner!

I wasn’t quite so keen on the head-hopping narrative. Whilst most of the book is told from Jessie’s point of view, there are some rather sudden hops into the heads of Sofie, Lauren, Marcus and other, more incidental, characters (Sofie’s jockish boyfriend Henry and the overly-friendly letting agent Ian, for example) that are not always especially well sign-posted. As a result, there was the odd occasion where I had to re-read a paragraph to check the perspective I was reading or found the jarring switch from one character to another jolting me out of my immersion in the book.

The Wrong Move also makes liberal use of some of the staples of the genre. Whilst Jessie, Sofie, and Lauren all felt well-rounded, some of the more incidental characters – especially the men – felt a little generic (there’s the jock, the creep, the loner, the nice guy etc). And whilst a lot of issues touched on in the book – coercive control, domestic abuse, drug abuse, mental illness – are covered with sensitivity, it did sometimes feel as if there wasn’t enough room in the plot to give all of these aspects sufficient space to breath.

Set these niggles aside, however, and there is a lot to like about The Wrong Move. It’s a quick page-turning read and has some fantastic dramatic set-pieces and twisty turning-points. I also really liked the way that the whole narrative is infused with a sense of unease. And whilst the ending didn’t have that jaw-dropping twist moment, the ambiguity of it flowed naturally from the preceding events and made for a satisfyingly creepy conclusion.

Whilst it doesn’t move away from the staples of the genre, The Wrong Move is an accomplished debut. The old adage of ‘if it ain’t broke, don’t fix it’ applies well here – Savin’s debut effectively uses tropes and conventions to create a story brimming with tension, suspicion, and unease and fans of psychological thrillers will find a great deal to enjoy here.

The Wrong Move by Jennifer Savin is published by Ebury and is available now from all good booksellers and online retailers including Hive, Waterstones, Book Depository, and Amazon.

Don’t forget that although your local bookshop might be closed at the moment, you can also support your local indie bookshops by ordering from them online! Some of my favourites include Booka Bookshop, The Big Green Bookshop, Sam Read Booksellers, and Berts Books.

My thanks go to the publisher and to NetGalley UK for providing a copy of the book in return for an honest and unbiased review, and to Anne Cater from Random Things Tours for organising and inviting me onto this blog tour. The tour continues until 03 May 2020 so do check out the other stops for more reviews and content! 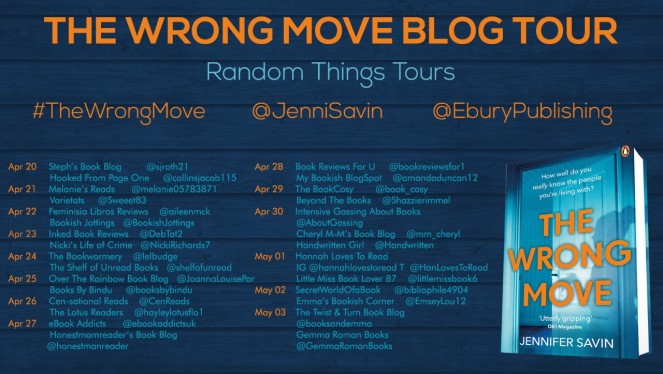 One thought on “BLOG TOUR!! The Wrong Move by Jennifer Savin”