In October 1957 Marlon Brando married a young studio actress called Anna Kashfi. He was thirty-three and at the pinnacle of his beautiful fame having recently won an Oscar for ‘On the Waterfront’.

The wedding was front-page news around the world. His new bride was twenty-three, claimed to be an Indian princess and was pregnant.

The day after the wedding a factory worker living in Wales, William O’Callaghan, revealed that Brando’s bride was, in fact, his daughter, Joan O’Callaghan. He said she had been a butcher’s assistant in Cardiff.

Who was telling the truth and who was lying? And, perhaps most importantly, why?

I have, I’ll admit, a slight fascination with the so-called ‘golden age’ of Hollywood. I’m a fan of the podcast, You Must Remember This?, and I find it both endlessly fascinating and achingly sad to discover the complex and often troubled nature of the real lives being led behind the facades the studios and the media so carefully curated.

The life of Anna Kashfi, the ‘forgotten’ first wife of Hollywood star Marlon Brando, is one such troubled life, and her story is given the treatment it deserves in Brando’s Bride, a biography by writer and researcher Sarah Broughton.

According to her studio biography, and the story she would most often relate about her own life, the ‘exotic’ Anna Kashfi was the daughter of Indian parents Devi Kashfi and Selma Ghose. Born and raised in India, she moved to Wales only when her mother met and married an Englishman, William Patrick O’Callaghan, living there briefly before setting off to London, where she came to the attention of a Hollywood producer and landed her first film role in The Mountain (1955), staring alongside Robert Wagner and Spencer Tracy.

According to Patrick O’Callaghan, his daughter was an English woman called Joan and was the daughter of his wife, Phoebe. Neither of them was Indian. In fact, they didn’t have a drop of Indian blood in the family at all. Phoebe’s family were, in fact, French.

So who was telling the truth?

As with most stories, the truth lies somewhere in the middle of these two accounts, a complex tale of Anglo-Indian heritage, personal shame, and Hollywood gloss. Broughton carefully fits together these pieces, picking apart the motivations behind the studios’ portrayal of Kashfi as an ‘exotic’ young actress, and examining why her parents; now assimilated into life in a Cardiff suburb, would distance themselves from their Anglo-Indian heritage – and why their daughter might wish to reclaim it.

It’s a fascinating tale even before Anna’s involvement with Marlon Brando. In fact, I preferred the book when the focus was on Anna. Whilst her tempestuous and short-lived marriage to Brando might be what she is most famous for, it is, in many ways, the least interesting thing about her.

Instead, I enjoyed the parts of Brando’s Bride that focused upon Anna’s acclimatisation into Hollywood, examining the creation and maintenance of identity within the studio system. The intense control that the studio’s maintained over their stars and starlets – and the carefully crafted versions of themselves that they wanted portraying – is really quite frightening, and it’s easy to see why so many young stars became deeply troubled figures in later life. The chapter on Anna’s contemporaries Pier Angeli, Belinda Lee, and Gia Scala, is both fascinating and poignant, as are glimpses into Brando and Anna’s own addictions, and the impact of these upon their son, Christian.

Broughton has clearly spent a great deal of time researching Anna’s life, although her prose wears this research lightly and Brando’s Bride benefits from this investigative, personal style. Whilst the book is largely sympathetic to Anna, Broughton also manages to maintain enough distance from her subject to cast a critical eye on the less salubrious aspects of her life, such as her continuing refusal to speak to, see, or even acknowledge her parents, and the bitterness that followed in the wake of her divorce from Brando.

Told with empathy, warmth, and insight, Brando’s Bride casts light onto one of the hidden histories of Hollywood. Although I had never heard of Anna Kashfi before – and cannot even claim to be a particular fan of Brando and his work – I found this to be a fascinating glimpse into the world that lies behind the glamour.

Brando’s Bride by Sarah Broughton is published by Parthian and is available now from all good bookshops and online retailers including Hive, Waterstones, Book Depository, and Amazon.

My thanks go to the publisher for providing a copy of the book in return for an honest and unbiased review, as well as to Anne Cater of Random Things Tours for organising and inviting me onto this blog tour. The tour continues until 20 October 2019 so do check out the other stops for more reviews and content! 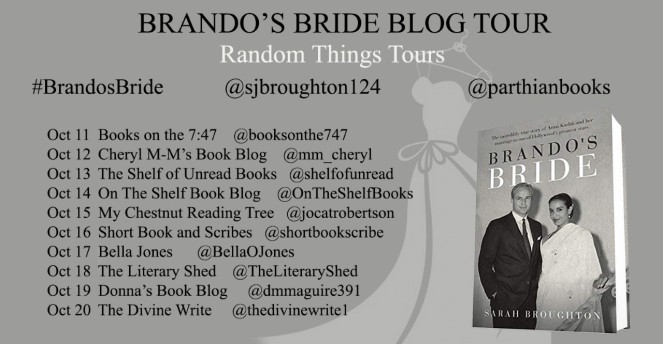 One thought on “BLOG TOUR!! Brando’s Bride by Sarah Broughton”