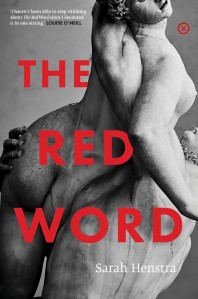 “The myths don’t have a clue what to do with women. They have nothing to say about us whatsoever. We need to build our own mythology.”

When university student Karen wakes up after a fraternity party on the lawn of Raghurst, a house of radical feminists, she gets a crash course in anti-frat activism on campus. One frat house, GBC, is especially notorious, with several brothers named on a list of date rapists by female students.

Despite continuing to party at GBC and even dating one of the brothers, Karen is seduced by the intellectual stimulation and indomitable spirit of the Raghurst women. As she finds herself caught between two increasingly polarised camps, her feminist housemates believe they have hit on the perfect way to bring down the fraternity and expose rape culture…but the war between the houses will exact a terrible price.

As you can probably guess from the striking and provocative cover, The Red Word is a bold, dark examination of rape culture, campus politics, and the dangers that lurk at the depths of fiercely held ideology.

I’ll start by saying that this isn’t a novel for sensitive readers. Featuring scenes and discussions of sexual violence, The Red Word is a no hold’s barred account unafraid to hold a lens up to both classical and contemporary culture in order to be both provoke and disturb. I thought it was masterful, thought-provoking stuff and I haven’t stopped thinking about it since I turned the final page.

With echoes of Donna Tartt’s The Secret History (one of my all-time favourite books), the novel opens with university undergraduate Karen waking up on a lawn after a wild frat party at the notorious GBC. The lawn belongs to Raghurst and the four women who inhabit the house – Dyann, Marie-Jeanne, Steph and Charla – are radical feminists, inspired by the teachings of their lecturer Dr Sylvia Esterhazy.

Entranced by the girls’ polemical ideology, Karen signs up for Dr Esterhazy’s class on ‘Women and Myth’ and becomes involved with the Dyann and Steph’s work at the campus Women’s Centre, where a ‘Wall of Shame’ has been established to expose sexual violence on campus. At the same time though, she is dating the increasingly needy and controlling Mike – a fraternity brother at GBC – and enjoys the parties and privilege that comes with being a fraternity girlfriend. As the novel progresses, Karen walks an increasingly fine line between her ideals and her reality, and between the discussion of radical action and the consequences of its implementation.

There’s so much going on in The Red Word that, at times, it’s an exhausting read. Like Tartt, Henstra has used classical myth as a touchstone and Karen’s story is interlaced with references to mythology, from chapter titles made up of Greek words to echoes of the tragic tale of Helen of Troy, who Karen is trying to write about for Dr Esterhazy’s class. For the most part, this adds to the structure of the book. I particularly liked how that the novel invokes the chorus calls to classical muses, evoking epic poetry and inviting the reader into the novel, as well as the way in which the chapter headings subtly foreshadowed events to come.

At times, however, I did feel that the classical illusions became a little laboured, especially towards the novel’s conclusion and in the sections of the book that are more overtly allegorical of the Trojan War mythology. And I’m not 100% convinced that Dr Esterhazy was a completely necessary character. Unlike in Tartt’s The Secret History, her influence appears much more benign and, at times, it felt as if she had been catapulted into a scene to add exposition or act as a deus ex machina, her teachings moving the plot along in a slightly artificial way.

Structuring and concluding a novel of this sort was always going to be a complex job, however. The Red Word is not a book that provides easy answers or leaves you with a sense that all is well with the world. Instead, it asks numerous questions, presents its arguments and then leaves you to think through the complexities involved. Unlike The Secret History, this is not a classical tragedy. Instead, we are in the realm of Epic, with its shades of the fantastical and its uneven narrative, swinging between the comic, the tragic and the mundane as it depicts the travails of everyday life. As such, Henstra has done a fine job of bringing the many strands of her narrative together to form a coherent whole.

She’s also created a cast of compelling and realistic characters who populate a world that seems both monstrous and terrifyingly real. And, as with reality, the lines between acceptable and unacceptable behaviour are all too blurred. Without giving any spoilers here, there are some shocks in store for the reader and, by the novel’s end, it was increasingly difficult to distinguish who (if anyone) held the moral high ground.

Although not without its faults, The Red Word is an extremely accomplished and compelling novel. It shocked, disturbed, and amused me in equal measures. Like Jo Baker’s The Body Lies, which I reviewed last week, it gave me the rage in all the right ways. And, most importantly, it encouraged me to think – to unpick the tangled knots of mortality that Henstra has woven into the fabric of her narrative. Make no mistake, The Red Word is a complex book and, as such, requires a complex response of its reader. But it is a deeply worthwhile and extremely rewarding read for those that take up the challenge. Definitely a novel that merits repeated reading, and intense discussion with friends, this is a book that will stay with you long after you’ve finished the final page.

The Red Word by Sarah Henstra is published by Tramp Press in trade paperback and is available from all good booksellers and online retailers including Hive, Waterstones, and Book Depository.

My thanks go to the publisher for providing a copy of the book in return for an honest and unbiased review, and to Anne Cater from Random Things Tours for inviting me to take part in this blog tour. The tour continues until July 6 2019 so please do check out the other stops for more reviews and content!

2 thoughts on “BLOG TOUR!! The Red Word by Sarah Henstra”