Yes, that’s correct – it’s a review bonanza on The Shelf today with not one, not two, but THREE mini-reviews of some recent reads. Basically, there are just too many amazing books being published at the moment so some of them are just having to share space! This post is going to be long enough without me blathering on so, without further ado, let me move on to my first review! 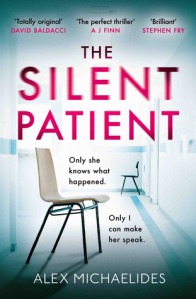 The Silent Patient by Alex Michaelides

Alicia Berenson writes in her diary as a release, an outlet – and to prove to her beloved husband that everything is fine. Until, late one evening, Alicia shoots Gabriel five times and then never speaks another word.

Forensic psychotherapist Theo Faber is convinced he can successfully treat Alicia. Obsessed with investigating her crime, his discoveries suggest Alicia’s silence goes far deeper than he first thought. And if she speaks, would he want to hear the truth?

I was lucky enough to read a sample chapter of The Silent Patient when I attended the Orion on Tour event last year and was taken with the premise: a psychotherapist trying to discover the reason behind a patient’s silence, and a patient who went from loving wife to murderous rage for no apparent reason. The idea stood out amidst a wave of domestic thrillers, many of which focus on marriages or relationships and were leading me, I’ll admit, to suffer from psychological thriller burnout. Since then, The Silent Patient has built up a TON of buzz so, on release day, I decided to pick up a copy and see if it lived up to the hype!

The verdict? Yes, for the most part.

This is definitely one of the smarter thrillers that I’ve read recently, offering a slow-burn narrative that drip feeds the reader with just enough by way of revelations to keep you turning the pages. I really enjoyed the way that the plot interweaves the myth of Alcestis, playing with the expectations that come from this and utilising them in new and unexpected ways. And the ending is utterly shocking, with a final revelatory twist that packed a punch.

If I had any slight criticisms, it would be ones that I could probably level at the psychological thriller genre as a whole. Whilst Alicia and Theo were reasonably well-defined, the remaining characters rather one-dimensional, especially Theo’s wife Kathy and his co-workers at The Grove, all of whom come to play rather integral parts in the story. I also found one of the central twists, which revolved around Theo’s personal life, to be rather cliche.

Ultimately, I guess what I’m saying is that The Silent Patient doesn’t really do anything that other psychological thrillers haven’t done before. However, it does what it does in a clever and stylish way and is definitely one of the better examples of the genre.

Michaelides writing is engaging and he definitely knows how to pace his twists and hold back key revelations until just the right moment. If you’re a fan of psychological thrillers, you’re going to love The Silent Patient. And if you’re new to the genre, it’s up there with the best as an example of an intense and compelling thriller with that unputdownable quality. 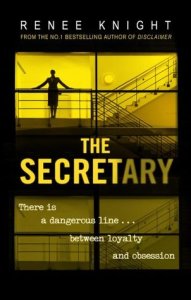 The Secretary by Renée Knight

Look around you. Who holds the most power in the room? Is it the one who speaks loudest, who looks the part, or who commands the most respect?

Or perhaps it’s someone like Christine Butcher: a meek, overlooked figure who silently bears witness to shared information and whispered secrets. Someone who quietly, maybe even unwittingly, gathers knowledge of the people she’s there to assist.

And when someone like Christine Butcher is pushed to their limit, she might just become the most dangerous person in the room…

Speaking of superior psychological thrillers brings us neatly to my next book, Renée Knight’s much-anticipated second novel, The Secretary.

Workplace politics should provide fertile ground for the thriller genre and yet there seem to be surprisingly few books that centre on the tense – and intense – relationships that can be formed in our working lives. In The Secretary, however, the workplace takes centre stage and the key relationship is the one formed between Christine, the erstwhile secretary of the title, and her charismatic boss Mina Appleton.

It’s a fascinating dynamic that Knight plays with to thrilling effect. Before she knows it, Christine is embroiled in the finer details of Mina’s life, keeper of her secrets both professional and personal. But what happens when your employer’s secrets have the potential to ruin lives?

The Secretary is another slow burn of a book. From the outset, hints are drip-fed gradually that all is not well behind the scenes of the Appleton empire – and that Christine may know more than she is telling the reader. The pacing is perfectly controlled and, when the revelations come, they send shockwaves through the story and lead to a complete re-think of the narrative up to that point. It’s tightly controlled, masterful plotting with a gradual build-up of tension that keeps the pages turning.

Knight’s writing style is pared back – something that took me a while to get used to – and, at times, the book is a little ‘tell not show’. However, this didn’t detract from my enjoyment of the book, or of my appreciation of what Knight has crafted here. It was so refreshing to read a thriller that wasn’t centred around family life or a romantic relationship but instead on the world of working women – even if this is a workplace that turns out to be as dangerous as it is alluring!

As with The Silent Patient, The Secretary isn’t doing anything revelatory with the genre but it’s definitely a superior thriller with plenty to offer fans both old and new.

My thanks go to Alison Barrow and the publisher for providing a copy of The Secretary in return for an honest an unbiased review.

The Flight of Cornelia Blackwood by Susan Elliot Wright

What has happened to Cornelia Blackwood?

She has a loving marriage. But she has no friends. Everyone knows her name. No one speaks to her.

Cornelia has unravelled once before. What could happen to her next?

And now for something completely different! To say too much about The Flight of Cornelia Blackwood would be to totally spoil the book – this is a novel that needs to be experienced with no prior knowledge of the plot in order to fully appreciate the raw emotional punch that it packs – but I can tell you how much I appreciated the book and the important story that it has to tell.

Susan Elliot Wright has crafted a superb novel here. It’s not an easy read by any means but this is a story of motherhood that handles a very emotive subject with great sensitivity and skill. Dealing with issues of mental health, new motherhood, grief and loneliness, this is a stunningly emotive read written with raw tenderness. Cornelia is a woman who is unravelling at the seams but I just felt so much for her and her situation – she makes some very poor choices but Wright made me understand them and empathise with her every step of the way.

The Flight of Cornelia Blackwood is a really important novel. Not being a mother myself – or even desiring to be one – I wasn’t sure how much a novel so centred on motherhood would say to me. But this book is a powerful testimony of the trials that women, whether mothers or not, face when it comes to societal expectations and mental health. It’s trigger warning central and not for the faint-hearted, however, in its treatment of its difficult subject matter, it’s a sensitively written and deeply emotional read and one that I would highly recommend.

My thanks go to the publisher, Simon and Schuster, for providing a copy of The Flight of Cornelia Blackwood in return for an honest and unbiased review.

So that is it! Three reviews in one post and three very different, very worthwhile titles that I hope might make it on to some of your reading lists. Have you read any of these books and, if so, what did you think? I would love to hear your thoughts so please do drop me a comment down below or come say hi over on Twitter @shelfofunread. And, until next time…

One thought on “REVIEW BONANZA!! The Silent Patient, The Secretary AND The Flight of Cornelia Blackwood”