“He had started to remove his clothes as logic had deserted him, and his skin was cracked. Whatever had been going through Cameron’s mind when he was alive, he didn’t look peaceful in death.”

Two brothers meet at the remote border of their vast cattle properties under the unrelenting sun of the outback. In an isolated part of Australia, they are each other’s nearest neighbour, their homes hours apart.

They are at the stockman’s grave, a landmark so old that no one can remember who is buried there. But today, the scant shadow it casts was the last hope for their middle brother, Cameron. The Bright family’s quiet existence is thrown into grief and anguish.

Something had been troubling Cameron. Did he choose to walk to his death? Because if he didn’t, the isolation of the outback leaves few suspects…

Having read and greatly enjoyed Jane Harper’s two previous novels, The Dry and Force of Nature, I jumped at the chance to be part of the blog tour for her third book, The Lost Man!

Whilst still set amidst the sun-bleached landscapes of Australia, The Lost Man is slightly different from her previous two books in that it doesn’t feature protagonist Aaron Falk (although there is a very cleverly hidden reference to him in the book for keen-eyed readers to spot!). Whilst you certainly didn’t need to have read The Dry to appreciate Force of Nature, this makes The Lost Man a complete standalone and has given Harper scope to experiment with a slightly darker tone to produce, in my humble opinion, her best book yet.

The Lost Man centres on the Bright family, cattle farmers in the remote Australian outback. Nathan, eldest of the Bright brothers and ostracised from both his family and his community as a result of a terrible decision made years before, is reluctantly pulled from his isolated existence when his brother, Cameron, is found dead. Dying of heat exhaustion and exposure in the middle of the Australian summer is not in itself surprising – this is a landscape that kills the unwary without mercy.  But when Cameron’s car is found several kilometres away from his body, filled with plenty of water and several days worth of supplies, Nathan begins to question why his brother would have walked into the wilderness – and whether he had help.

Thus begins a gradual unravelling of family secrets, spiralling into the past and causing troubled memories to resurface that send ripples through Nathan’s remote outback community.

I really took to Nathan as a narrator. His gruff, awkward outward demeanour belies a contemplative and considerate nature and, even when the awful truth of his past mistakes are revealed, you can’t help but empathise with him. One of the main strengths of the book is the gradual revealing and development of Nathan’s character, as he begins to step out from the shadows of his past and look towards future possibilities. As Nathan begins to unravel the truth behind Cameron’s death, he has to explore long-neglected relationships and decide who he can trust amidst the small list of suspects. And, as the reader, you’re right there alongside him, putting together seemingly incidental pieces of information and pulling them into a cohesive narrative that eventually leads to the real reason Cameron Bright ended up dying so slowly and painfully out at the stockman’s grave.

The supporting cast are equally well realised and, as the novel progresses, you get a real sense of the shifting family dynamics and divided loyalties at play within the Bright family. Harper is fantastic at developing rounded characters and all of her characters feel like real people, with strengths and flaws. Good guys and bad guys are in short supply in The Lost Man. Instead you have people making choices; some good, some bad and some terrible.

The final character worthy of note is the outback itself. Harper has utterly captured the harsh yet beautiful landscape in which her story is set. From the searing dust of an outback morning to the cool balm of nighttime air, you can practically feel the heat rising from each page. The thin line between life and death in this beautiful but deadly landscape is bought fully to life in the book, and getting a glimpse into the struggle to maintain life amidst such a harsh climate was a fascinating aspect of the book.

As you can probably guess from the emphasis on character and setting, this is a slow burn of a book. The first third takes its time to set up the characters and the place, drip-feeding information gradually. The plot picks up pace about halfway in and I devoured the last third late at night, determined not to finish until I’d reached the end. So there’s a definite compulsion to the narrative but I wouldn’t necessarily call The Lost Man a page-turner. It’s a book that rewards considered reading and will be most appreciated by readers who want a well-written, compelling narrative with added depth. Fans of The Dry and Force of Nature will not be disappointed with The Lost Man and, with its mesmeric setting, entrancing narrative twists and absorbing characters, I very much hope that the book will bring a host of new readers to her work.

The Lost Man by Jane Harper is published by Little, Brown and is available now from all good booksellers and online retailers, including Hive, Waterstones, Book Depository and Amazon. My thanks go to the publisher and Netgalley for providing a free eARC of the book in return for an honest and unbiased review, and to the publisher for inviting me onto this tour. The blog tour continues until 13 February so please do check out the other stops along the way! 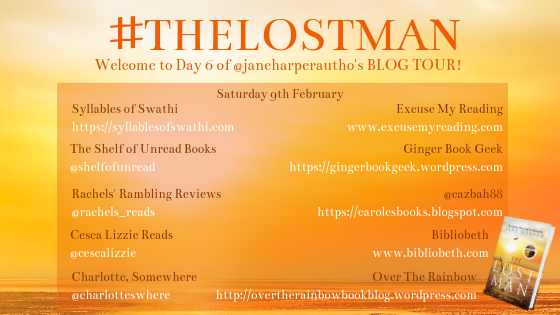