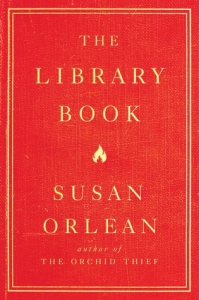 After moving to Los Angeles, Susan Orlean become fascinated by a mysterious local crime that has gone unsolved since it was carried out on the morning of 29 April 1986: who set fire to the Los Angeles Public Library, ultimately destroying more than 400,000 books, and perhaps even more perplexing, why?

Weaving her lifelong love of books and reading with the fascinating history of libraries, Susan Orlean investigates the legendary fire to showcase the larger, crucial role that libraries play in our lives. She also reflects on her own childhood experiences in libraries; studies arson and the long history of library fires; attempts to burn a copy of a book herself; and re-examines the case of Harry Peak, the blond-haired actor long suspected of setting fire to the library over thirty years ago. Along the way, she reveals how these buildings provide much more than just books – and that they are needed now more than ever.

As a keen reader of books about books who also has an interest in non-violent and historical true crime, I was immediately interested in Susan Orlean’s The Library Book. It’s one of those multifaceted books that wears many hats – examining the devastating fire that decimated Los Angeles Central Library in 1986 and the personal history of the man accused of starting it, whilst at the same time providing an eclectic history of the Los Angeles library system and an examination of the role of the public library within our increasingly digital world.

Orlean’s narrative is extremely dense and the book covers a lot of ground in it’s 300 or so pages. But the clear and engaging prose, which blends personal reflection with immersive journalism and factual history, drew me into the narrative and gave the book a compulsion.

Orlean really captures the intensity of feeling that surrounds libraries and books. Her description of the library fire is devastating for a book lover to read – she really makes it easy to empathise with the librarians, who cried on the street as they watched over 400,000 items from their extensive collection go up in flames. In a fascinating chapter, Orlean burns a book herself; an act that she finds both terrifying and subversive. It’s a feeling that I completely understood and I found myself mourning the lost knowledge that was turned to ash on the morning of 29 April 1986.

Orlean’s sensitive treatment of Harry Peak, the charismatic young actor suspected of setting the library fire, manages to convey both the fiercely-held belief that investigators had in Harry’s guilt whilst acknowledging the fallibility of fire investigation techniques and the circumstantial nature of the evidence available at the time.

That said, Harry’s narrative was, for me, the weakest part of the book – although that is the fault of history rather than of Orlean. Harry, a man who constantly re-wrote his own narrative, flits elusively through the pages and you definitely get the sense that Orlean, like many of the other people around him, struggles to pin him down. The Library Book is impeccably researched but, as Orlean admits, the truth about the library fire – and whether Harry had any involvement in it – will probably never be known. This does give the ending a slightly subdued quality – the pace drops off noticeably in the last third as it becomes apparent that this isn’t a mystery that will have a resolution. To Orlean’s credit, she instead turns the book into a love letter to libraries and a reflection on their importance in the world today.

The Library Book may disappoint readers looking for a true crime narrative. There are definitely similarities in pacing and style with David Grann’s excellent Killers of the Flower Moon and Michelle McNamara’s I’ll Be Gone in the Dark, but this is a very different kind of book in tone. The Library Book isn’t about finding the answer to a mystery – it’s an ode to books, a love-letter to reading and a homage to libraries and their place in the world. It’s a book that’s perfect for anyone who has whiled away hours browsing the stacks or has childhood memories of magical trips to neighbourhood branches. In short, it’s for anyone who appreciates the power of libraries to fascinate, to educate, to entertain and to unite – a rich, warm and heartening book that kept me spellbound throughout.

The Library Book by Susan Orlean is published by Atlantic Books and is available now from all good bookshops and online retailers including Hive, Waterstones and Amazon. My thanks go to the publisher for providing me with a copy in return for an honest and unbiased review.