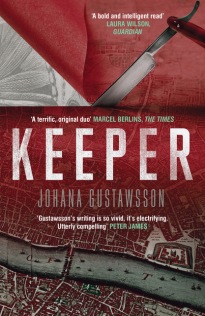 Whitechapel, 1888: London is bowed under Jack the Ripper’s reign of terror.

London, 2015: actress Julianne Bell is abducted in a case similar to the terrible Tower Hamlets murders of some ten years earlier, and harking back to the Ripper killings of a century before.

Falkenberg, Sweden, 2015: a woman’s body is found mutilated in a forest, her wounds identical to those of the Tower Hamlets victims. With the man arrested for the Tower Hamlets crimes already locked up, do the new killings mean he has a dangerous accomplice, or is a copy-cat serial killer on the loose?

Dual timelines are tricky to pull off in any novel but especially in crime fiction. Too much detail and the narrative loses it’s tension, too little and the plot gets lost in the haze. Despite adding an international cast and fair bit of country hopping into the mix however, Johana Gustawsson handles the various strands of Keeper’s complex plot like a pro, ratcheting up the tension with every turn of the page and delivering a multi-layered mystery that combines nordic noir with psychological compulsion.

Keeper is the second in Gustawsson’s Roy and Castells series and sees the return of Canadian profiler Emily Roy, now working for as a Behavioural Investigative Advisor for the Metropolitan Police and French true-crime writer Alexis Castells, whose personal connection to the Tower Hamlets killings could jeopardise their new investigation. The two ladies make engaging leads, with Roy’s icy genius contrasting nicely to Alexis’ more emotional, instinct based approach.

With chapters told from a number of different viewpoints and a large cast, it would be easy for characters to become redundant but Gustawsson manages to make each person feel distinct – from the suave and capable DCS Jack Pearce to the Alexis’ scene-stealing mother Mado. Aliénor Lindbergh, an intern on the Swedish side of the investigation with Asperger Syndrome, was a favourite for me. I have limited knowledge of the disorder but the author credits the president of the Étoile d’Asperger association with assisting in crafting the character and Aliénor certainly comes across as a well-rounded individual, with determined attention to detail and a frank ‘say what you see’ attitude to communication, making a valuable addition to the investigative team. I very much hope she returns in future books.

The mystery itself is also incredibly detailed, with plot strands weaving through from 1888 to 2015 and moving between London and Sweden throughout. There are, admittedly, times when the rip-roaring pace left me losing one of the threads, necessitating a quick flick back a page or two to pick up on the key piece of information I’d sped past  – but these were few and far between which is a real achievement for a book that features a celebrity abduction, two identical murders in two different countries, a series of high profile historic crimes and a killer whose origins may all link back to Jack the Ripper. Make no mistake, there’s a lot going on in this novel but, for the most part, Gustawsson pulls it off.

As you’d probably expect from a novel that mixes Nordic noir with Jack the Ripper, the book isn’t for the faint-hearted. From descriptions of the gory mutilations on a victim’s body to the claustrophobic atmosphere of poverty-stricken Victorian Whitechapel, Gustawsson doesn’t shy away from the gritty detail. So if you like your crime cosy, this one probably isn’t going to be for you. That said, Keeper never feels gratuitous in its violence – if it’s depicted on the page it’s there for a reason.

And the ending? Well, we’re spoiler free here at The Shelf but it doesn’t disappoint providing a number of satisfying twists and turns before revealing the truth behind the whole affair with its plausibility still intact.

And having not read Gustawsson’s first Roy and Castell’s thriller, Block 46 (something I intend to remedy in the very near future), I can also attest that the book loses absolutely nothing when read as a standalone – although you’ll probably want to pick up the first books as soon as you finish this one!

Dark and disturbing but beautifully crafted, with mesmerising twists and turns and astute attention to detail, Keeper is a fast-paced read that will leave crime thriller fans breathless and gives noir fans a fantastic new voice from which to anticipate more.

Keeper by Johana Gustawsson (translated by Maxim Jakubowski) is published by Orenda Books and is available now as a paperback and ebook from all good bookseller and online retailers including Hive, Waterstones and Amazon. My thanks go to the publisher for providing a copy of the book in return for an honest and unbiased review, as well as to Anne Cater from Random Things Tours for organising and inviting me to take part in this tour.