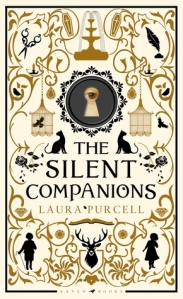 I always feel that the first book you choose to read in a year is, somehow, a reflection of what that reading year will be like. A silly superstition I’m sure but we all have our quirks and picking my first book of a new year is one of mine.

Last year I started with The Essex Serpent by Sarah Perry which ended up being one of my favourite books of 2017 – so my first read of 2018 had big shoes to fill! Fortunately The Silent Companions, which had been lingering on my TBR far too long, turned out to be a great choice to kick of 2018 – spooky, atmospheric and spine-tingling, it had me turning the pages whilst curled up under the duvet and checking the shadows for sinister beings!

Set in both the 1800s and 1600s, the novel recounts the sinister string of events that have led to Mrs Elsie Bainbridge being examined in a psychiatric hospital on suspicion of arson and murder. Mute and traumatised, Elsie is gradually forced to recollect the events of the previous year which started with her new husband Rupert’s death and her journey; accompanied by Rupert’s cousin Sarah, to his ancestral home, The Bridge. Gothic and crumbling, The Bridge is an eerie place, made all the more unsettling by the hissing noise emanating from the locked garret. Yet when Elsie and Sarah force their way into the dusty attic space, all they find is a Silent Companion: a wooden figure, carefully carved and painted to fool the eye into thinking they are real. But is there more to the Silent Companion than meets the eye? Why does it bear a striking resemblance to Elsie herself? And why did Robert’s ancestor, Anne Bainbridge, who lived at The Bridge back in the 1600s fear them so dreadfully?

There is a strong psychological element to this ghost story. Elsie, confused and traumatised by the events of the previous year, is a fantastically unreliable narrator and, as the only surviving witness to her version of events, it becomes impossible for the reader to decide on the true narrative. Is Elsie really the victim of sinister supernatural forces that haunt The Bridge? Or is she a psychotic murderess whose own dark past has finally led her to commit terrible deeds? Even at the end of the book, it’s far from clear what the true course of events actually is – as with all the best ghost stories, it’s left to the reader to decide how much you really believe in the tale being spun.

The supernatural elements themselves are handled really well and I completely bought into the Companions as objects of terror. Whether you see them as objects of Elsie’s tortured imagination or as the inanimate hosts of an unspeakable evil, they’re sinister, creepy and guaranteed to leave you with the shivers.

There’s also a fantastically charged and controlled atmosphere throughout the book. Every page oozes with tension and there’s a creeping sense of horror and dread as you turn the pages. Seemingly innocuous conversations, objects and events become charged with meaning as you switch between Anne Bainbridge’s diary, Elsie’s recollections of The Bridge and her present life in the psychiatric hospital.

And the horror isn’t just supernatural but social. I felt that there was an underlying narrative within the book about the roles and perceptions of women. Whether it’s suspicious whispers about witchcraft in the 1600s or the fear of female madness and hysteria in Victorian England, the events of the novel cleverly illustrate the myriad ways in which fear of the strange and supernatural has often been tied into the control and subjugation of women. It makes the book genuinely frightening, both in term of the supernatural agencies that might be at work and the real world fears of societal exclusion and condemnation faced by Elsie and Anne.

With it’s creeping sense of dread and shades of Gothic horror, this novel reminded me very much of the works of Susan Hill combined with elements of Wilkie Collins and M R James. Utterly terrifying (but in a good way!), I’m definitely up for more of Laura Purcell’s particular brand of spooky in the future so was delighted to read that she has another Gothic thriller due to be published in 2018. In the meantime, if you don’t mind your reading year starting with the spooks, definitely add The Silent Companions to your TBR!

The Silent Companions by Laura Purcell is published by Raven Books (Bloomsbury) and is available now in hardcover and ebook from all good bookshops.

8 thoughts on “REVIEW: The Silent Companions by Laura Purcell”