Gosh, time seems to have run away from me again. One moment it was #Diverseathon and the next, that week and another have flown by and I’ve not updated my blog! I also don’t seem to have read many books in the intervening period, although this is because I’m currently in a bit of butterfly mood so am in the middle of about six. As such, I thought that it might be best to have a bit of a catch-up post rather than a review or a wrap-up and to tell you a little about what I’m currently reading and my thoughts on them so far. So go grab yourself a cuppa and let’s settle down for a chat!
During #Diverseathon I did start ‘The Good Immigrant‘, the essay collection by twenty-one BAME authors writing about life in Britain today, which is edited by Nikesh Shukla. I prefer to dip into and out of essay collections because I like time to reflect on each essay before starting the next. So far I’ve read about six or seven in this collection and have found each one to be thought-provoking and challenging. The topics covered so far have ranged from the misappropriation of language through to the narrow populist definition of ‘Asian’ culture. Whilst I haven’t agreed with everything said by the respective writers, each essay has been well-argued and really conveys the feelings of the writer about their role as a person of colour within modern Britain and the challenges that they face as a result. Definitely a very timely book, this is one that I am going to continue dipping into as the months go on.
I’ve also pledged to assist in the crowd-funding of a new essay collection, co-edited by Nikesh Shukla, called ‘Rife: Twenty Stories from Britain’s Youth‘, which will feature contributions from twenty writers under twenty-five. It sounds really interesting – I might no longer be under twenty-five myself but I remember twenty-year-old student me being astounded that the ‘young, up and coming’ writers referred to on my courses were very often in their thirties and forties! And given that so many newspaper articles talk about the struggles facing ‘the youth of today’ but very few seem to feature comment from the ‘youth’ in question, I think this sounds like another much needed collection.

Also on the non-fiction front, I’ve been dipping into Will Schwalbe’s ‘Books for Living‘. Subtitled ‘A Reader’s Guide to Life’, this literary memoir is an affectionate look at the books that have helped to shape Will Schwalbe’s life and the lessons they’ve taught him along the way. I found Will’s first book, ‘The End of Your Life Book Club‘, about the books that Will shared with his mother whilst she was undergoing cancer treatment, to be both gently inspiring and sensitively emotional and I really engage with his writing. I’m enjoying ‘Books for Living’ so far but have had to put it down for a few days to crack on with two fiction books that I really need to get finished.

The first of these is ‘The Ashes of London‘ by Andrew Taylor, a historical novel set during the aftermath of (you guessed it!) The Great Fire of London, which is my real-life book club’s pick for this month. Alternating between the viewpoint of a young clerk investigating a series of grisly murders and that of a runaway girl determined to find her father, this has got me gripped after a somewhat slow start. I’ve not made enough progress to make the connections in the plot just yet (chances of me finishing before book club later this week? Zero to none…) but I’m intrigued enough to keep reading as, 100 pages in, the pace has really quickened and the characters are coming into their own.

I’m also right at the end of ‘Days Without End‘ by Sebastian Barry, which I picked up during #Diverseathon and have been slowly savouring each night before bed. I won’t say too much about the book here because I’m going to do a full review when I’ve finished – suffice to say however that I’ve absolutely adored it. I was about halfway through when it was announced that the novel had won the Costa Book Award 2017, a well-deserved accolade but one that does mean my library copy is now very much in demand, hence the race to finish it before the due date! 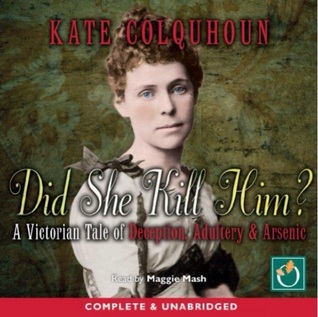 Last, but by no means least, I’m also listening to a book on audio – Kate Colquhoun’s ‘Did She Kill Him? A Victorian Tale of Deception, Arsenic and Adultery‘. I generally prefer to listen to non-fiction on audio and very much enjoyed Colquhoun’s ‘Mr Brigg’s Hat: A Sensational Account of Britain’s First Railway Murder‘ when I borrowed the CDs from the library back in the days before Audible became a thing. Narrative non-fiction, especially combined with another of my favourite genres – crime, is a particular favourite and Maggie Mash does a great job of narrating this tale of Southern belle Florence Maybrick, trapped in an increasingly suffocating marriage, who stands trial for the apparent poisoning of her husband James. I’ve only got a couple of hours left to listen to and I still can’t say for certain whether I think Florence is innocent, or if I can guess how the jury will decide. Thanks go to +SavidgeReads for this particular recommendation as I saw the book during one of his recent unboxing videos – I wouldn’t have even know it existed otherwise.
So that’s my ‘Currently Reading’ pile as it stands at the moment. If you’ve read any of them – or are in the process of doing so – please do let me know in the comments below or over on Twitter/Litsy/Goodreads. As always, I’d love to know what you’ve been reading recently and if you have any recommendations for me. And, until the next time….
Happy Reading! x