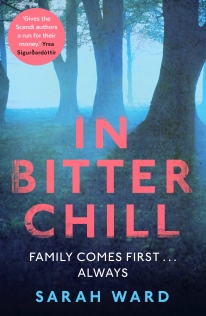 Last month I had the pleasure of attending a reading and Q&A at my local bookshop with Sarah Ward, blogger and reviewer at Crimepieces.com and now crime author, whose debut ‘In Bitter Chill‘ is now available in paperback from Faber & Faber (in the UK) and Minotaur Books (in the US).
Set in the Derbyshire Peak District, ‘In Bitter Chill’ is a tightly plotted police procedural that examines the repercussions of one January day in 1978 when schoolgirls Rachel Jones and Sophie Jenkins, are abducted on their way to school. Only Rachel returns home, confused and semi-conscious and with no memory of what happened to her friend. Over thirty years later, Sophie’s mother commits suicide and Sophie’s case is re-opened. For the local police team, headed up by the enigmatic DI Francis Sadler, the cold case starts out as a frustrating distraction. For Rachel Jones, now a genealogist, it opens old wounds. But both the police and Rachel soon begin to realise that the past holds many secrets and  that the only way for Rachel to have a future, is to discover what really happened all those years ago.
As a lover of a good crime novel, I really enjoyed ‘In Bitter Chill’ which has that page-turning quality that grips a reader from the first page to the last. Skillfully plotted, the central mystery had me guessing until the end and the family history element was both interesting and unusual. The cover quote allies the novel with Scandinavian crime fiction but, whilst the strong characterisation and plotting do certainly have a resemblance to the Nordic Noir of authors such as Camilla Lackburg and Jussi Adler Olsen (as does the decidedly chilly January setting!), there is definitely less of the violence that sometimes puts readers (myself included) off Scandi crime. Whilst ‘In Bitter Chill’ is by no means ‘cosy’ crime, I’d put it more on par with the tense and meticulous police procedurals of Elizabeth George and P D James, with a focus on the often complex inner psychology of the characters. 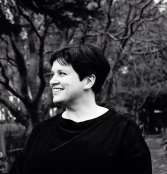 Following her reading, Sarah kindly agreed to answer a few questions about the writing of the book, the inspiration for her work and what the future holds for her work:
The Shelf of Unread Books: Firstly, I’d be really grateful if you could provide a little background on your writing. You run an established crime blog, Crimepieces, and are a judge for the Petrona Award  for Scandinavian translated crime fiction, so was it this that inspired you to start writing or had you always had the urge to write?And was ‘In Bitter Chill’ your first attempt at a novel?
Sarah Ward: I’ve been a reader of crime fiction from a teenager and had been reviewing for about ten years. I always wanted to write  a crime novel but it wasn’t until I was living in Athens, Greece that I felt I had the time to dedicate to a book. In Bitter Chill was my second attempt. I have a manuscript in my ‘drawer’ that contained the police characters of DI Sadler and DC Connie Childs but I felt that the story needed more work. So I started again.
TSoUB: ‘In Bitter Chill’ is set in a fictional Derbyshire town called Bampton and, I feel, is very routed in the place and has a real sense of the surroundings. I’m aware that you currently live in Derbyshire yourself so what was it about the county that made you want to set a crime novel there?
SW: I live in the Peak District which is very beautiful but at the mercy of the elements. I like novels where the landscape plays a pivotal role in the narrative and therefore Derbyshire seemed perfect. I like the fact it’s not a rural idyll but also has elements of its industrial revolution heritage and also changes with the seasons. Summer is packed with tourists whereas in winter it is much quieter.
TSoUB: I enjoyed the alternating narrative, switching between Rachel in one chapter and the police investigation in the next. What made you choose this method of telling the story, as opposed to a straight police procedural or just sticking to Rachel’s viewpoint?
SW: I like reading police procedurals (Peter Robinson and so on) but I also like standalone novels where the protagonist’s story comes to a conclusion at the end of the book. I tried to combine the two in In Bitter Chill.
TSoUB: Rachel and Sophie’s abduction takes place in 1978 but the main story is set in the present day. Did you deliberately choose to have the original crime set in the past? And what made you choose the late 1970s as the initial setting for the story?
SW: I made Rachel exactly the same age as me as I wanted to use my own memories of the 1970s through a child’s eyes rather than rely on research. I also wanted the crime to have taken place in the past because I think old cases can still have a resonance on a small community especially where it involves a child.
TSoUB: Your novel has been compared to Scandinavian crime fiction and I can definitely see the resemblance in style and tone to the work of say, Camilla Lackberg. Were you specifically influenced by Scandi crime fiction and are there any other influences behind your work?
SW: I suspect that I have been influenced by lots of crime novels that I’ve read over the years. My favourite writers are PD James and Ruth Rendell and I have read so many of their books over the years they must have influenced my writing.
TSoUB: You mentioned that Saddler, Palmer and Connie will all feature in your next novel, which will also be set in Bampton. Can you tell us a little more about the next book and your plans for the characters in the future? And will there be any more returning characters – Rachel and Richard for example?
SW: My next book is about a woman who goes to prison for the murder of her husband who then subsequently turns up dead twelve years later. It’s again about secrets but this time ones we don’t share at all. You’ll see all the police characters but there will be new protagonists and a new mystery to solve. I feel Rachel’s story has been told in In Bitter Chill!
TSoUB: Finally, do you have any recommendations for readers who have enjoyed ‘In Bitter Chill’? I always like asking people what they’ve recently read and enjoyed!
SW: I’ve recently read Hans Olav Lahlum’s ‘The Catalyst Killing‘ a Norwegian crime novel with a classic feel set in 1970. He’s one of my favourite writers at the moment.
I’d highly recommend taking some time out to curl up with ‘In Bitter Chill’ over the Christmas break – given the wintery setting and title, it’s the perfect novel for this time of the year and and ideal last minute Christmas present for the crime fiction fan in your life. I was also delighted to learn that Sarah hopes to write three further novels set in Bampton and, whilst Rachel’s story is completed at the end of ‘In Bitter Chill’, DI Sadler, DS Damian Palmer and DC Connie Childs will return in ‘A Fragile Spring’, which is currently scheduled for publication in 2016.
Many thanks again to Sarah for answering my questions. You can find out more about Sarah on her website, crimepieces.com and by following her on Twitter @sarahrward1. ‘In Bitter Chill’ is published as a paperback by Faber & Faber, priced £7.99, and is available now from all good book retailers (links below):
Amazon
Waterstones
Book Depository

One thought on “INTERVIEW with Sarah Ward: Author of ‘In Bitter Chill’”